Living in Beijing is now at an unbearable stage with pollution levels soaring since 19th February. PM 2.5 (particulate matter) concentrations that are the most damaging to human health hit levels of 432 yesterday – the World Health Organisation levels are a mere 25 for day long exposure.  No doubt much of this smog is due to the factories that surround the city with coal burning estimated to be the main source of the pollution contributing 19% according to a estimates by Greenpeace and the School of Public Health at Peking’s University.  An increasing amount is now caused by the rise in vehicle ownership contributing 6% to the overall mix.

Premature deaths and lung disorders are placing a huge burden on the population who are becoming more vocal in their protests about the degradation in air quality.  Multiple measures will be needed to clean up the mess over a period of time as has been the case in places such as California.  Electrifying the toxic vehicle fleet and investing in cleaner energy technologies will all be part of the answer.

We may think in Australia we are removed from such health issues related to air pollution but the evidence tells us that we are spending billions of dollars annually in health costs in this area (click for our Health Issues page).  In Australia as in much of the developed countries of the world the main source of this pollution is vehicle exhaust. 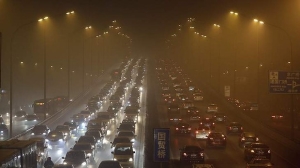 It really is time for us all to realise that our current fuel source for transportation is antiquated, toxic, high risk, lousy for our balance of trade and a strategic nightmare as recently pointed out by the NRMA commissioned study by Air Vice-Marshal John Blackburn. It is time to roll out the infrastructure for an electrified fleet and put in place inducements to change over to a cleaner and less risk averse means of transport.