Currently there are limited numbers of electric cars from the global motor manufacturers in Australia.  It seems that a lack of government incentives and limited infrastructure are curbing the enthusiasm for vehicles to be shipped to the land down under.

While the US, China, Japan & Europe continue to increase the uptake of these vehicles with greater and greater choice of models, the Australian market place languishes through lack of commitment from Government in the form of incentives or infrastructure roll out.  Even Greece, despite it’s economic woes, offers incentives for electric vehicle uptake.

There are four major reasons why the Australian government (of any political persuasion) should be encouraging EVs by way of incentives – these are energy security, economic, health and environment.

The most important of these reasons from a strategic standpoint is Energy Security.  Today Australia relies on foreign liquid fuel imports for 85% of it’s needs (and climbing).  Australia’s refining capacity is also dwindling and it’s estimated that by 2030 there will simply be no refining capacity in Australia at all.

Despite having huge natural reserves of energy and virtually limitless sunshine, the domestic transport fleet (including of course the armed forces) rely almost exclusively on imported liquid fuels. This reliance puts Australia in a critically vulnerable position if imported supplies are disrupted for any reason.

If the supply of liquid fuels is disrupted for even a short period Australia would grind to a halt within days.  That is the finding of the report commissioned by the NRMA and carried out by Air Vice-Marshall John Blackburn (retired) titled “Australia’s Liquid Fuel Security”.

The report calls on the Australian government to take precautionary measures to deal with the disruption of the flow of oil to Australia.  The report reveals a frightening scenario if the supply is disrupted through war, natural disaster or economic turmoil.

The following graphic, courtesy of the NRMA report, highlights the risk: 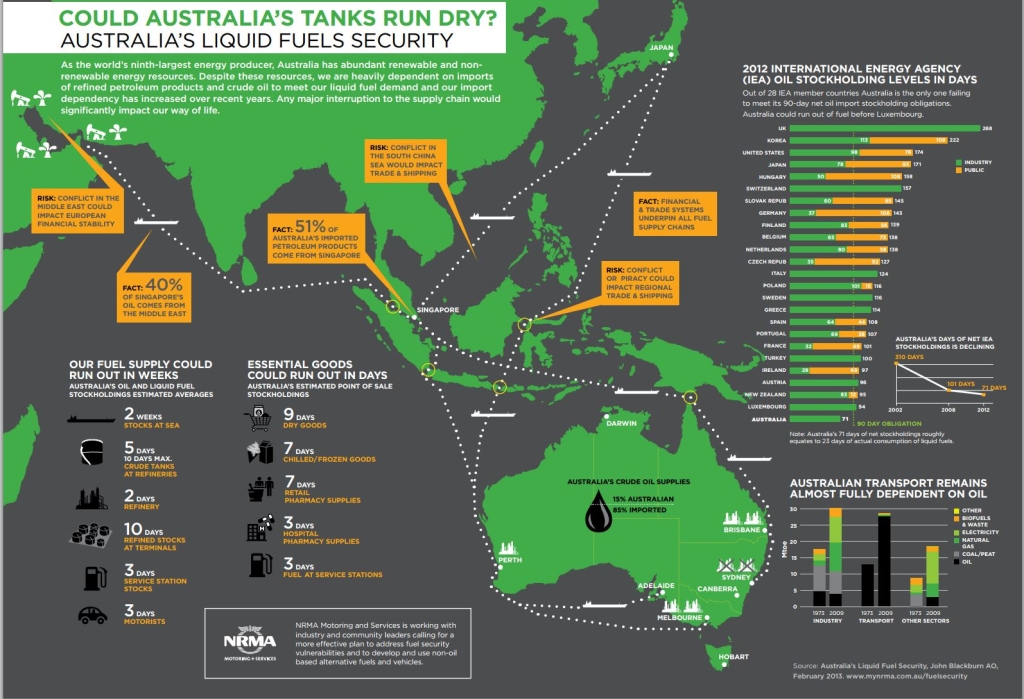 The government has received fierce criticism for this “passive” approach, with Liberal Senator Jim Molan labelling it “a single point of failure for Australia”. He warns that not only would a chronic oil shortage devastate Australia’s economy, but it would also immobilise the military.

With such high risk to Australia’s well being, it is imperative plans are put in place to lessen our dependency on liquid fuels or reduce it to minimal levels.  Part of that planning should be to invest in an electrified fleet that can be powered by locally generated renewable energy.