This is one of those OMG moments in the evolution of vehicle technology – this has to be the most incredible futuristic car that has been produced on the planet.  The technology is still under wraps but it’s a radical new way to thrust an exotic machine through its paces.  With a reputed acceleration of 0-100kph in 2.8 seconds this is something you may need g force training in before you enter the cockpit.  The Quant e-SportLimousine with nanoFlowCell technology has just been approved for use on the public roads of Germany where it was developed.

Nunzio La Vecchia, the technial manager, describes it thus: “Here in Munich in particular, where other prestigious automobile manufacturers are advertising their electric vehicle with the slogan ‘ERSTER EINER NEUEN ZEIT’ (‘FIRST IN A NEW AGE’) or ‘THE MOST PROGRESSIVE SPORTS CAR’, we are delighted as pioneers to be able to present an automobile driven by flow cell technology on public roads, and one which achieves not only fantastic performance values but also zero emissions. With a projected top speed of over 350 km/h, acceleration from 0-100 km/h in 2.8 seconds, a torque of four times 2,900 NM, a length of over 5.25 m and a range of more than 600 km (370 miles) the four-seater QUANT e-Sportlimousine is not only a highly competitive sports car but also SEINER ZEIT VORAUS – UND ZWAR SCHON HEUTE (‘WELL AHEAD OF ITS TIME – IN FACT TODAY’).” 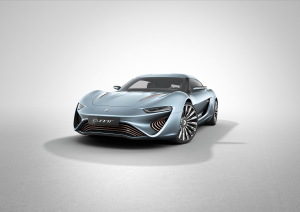 Prof. Jens-Peter Ellermann, chairman of the board of directors at nanoFLOWCELL AG went on to elaborate on how this technology could be employed in other areas: “We’ve got major plans, and not just within the automobile industry. The potential of the nanoFLOWCELL (R) is much greater, especially in terms of domestic energy supplies as well as in maritime, rail and aviation technology. The nanoFLOWCELL (R) offers a wide range of applications as a sustainable, low cost and environmentally-friendly source of energy.”

This is not in production yet and the above claims can only be considered when we see cars rolling off the line but this is a most outlandish set of projections and claims.  The interesting aspect of it all is that the car has now been given approval for road testing on German roads.  We wait in anticipation of a production time frame and schedule.