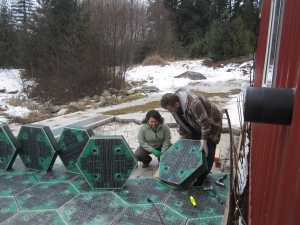 Some of you may already be aware of the idea of Solar Roadways as the youtube video Solar Freakin Roadways has been viewed over 5 million times.  So what are solar roadways? Well literally they are roads, carparks, driveways or any other road surface paved in solar panels replacing the bitumen or other road surface.

Crazy idea or Brilliant idea?   Best to judge for yourself by watching the video and then heading over to the Indiegogo crowd funding website to get more information (click here for the link).  Maybe not so much crazy, more like intriguing.  I flicked the video link to one of my friends and his initial comment was it would be too costly.  I’m not so sure.  According to the video, there are enough paved areas in the United States to generate three times the amount of energy the US consumes.

Idaho couple Julie and Scott Brusaw have come up with this outstanding idea that not only generates energy but also cleans up the heavily polluted storm water than drains in to rivers and oceans and is a major environmental problem.  The side benefits of illuminated roads are also not to be dismissed – the potential is huge. 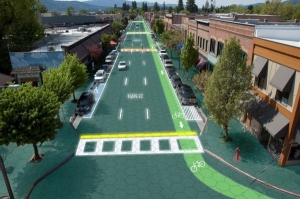 Would this be too costly?

Below are some Solar Roadways achievements (quoted from the Indiegogo website)

To move things forward the Brusaws have used the power of crowd funding via Indiegogo to try and raise 1 million dollars.  Currently, as I write, the subscription amount is now $1,303,523.  Lots of people love this idea and have dipped in to their wallets to make it happen.  I can’t wait to see the prototype parking lot!