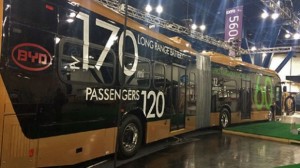 Chinese battery company BYD have announced the worlds largest electric bus  – the articulated or ‘bendy’ Lancaster ebus.  The bus has been designed and built in the US town of Lancaster and is powered by iron phosphate batteries.  This gives the 18 meter long people mover, a range of around 240kms with a payload of 120 passengers – enough for a typical day’s work before recharging for the next shift.

BYD are the company Warren Buffet’s, Berkshire Hathaway, famously bought 10% stake in back in 2008.  Their roots are as a battery manufacturer but the company has diversified into auto manufacturing, LED lighting, Solar Panel manufacturing and areas of IT.  They are now China’s largest non government owned auto makers.

With the Chinese governments ‘war on pollution’ announced this year in an effort to curb dangerous smog levels in its major cities and greater incentives for electric vehicles, the future success of BYD seems pretty assured.  BYD’s shares have gained nearly 30% in Hong Kong in the past twelve months.  This is the type of public transport technology we need to clean up the city streets – nothing worse than sitting behind a diesel bus breathing in cancer fumes!