It’s on again! Electrikhana is being staged at the RAC driving centre, 16 Grogan Road Perth Airport. It runs from 9am – 4pm on 11th March.  This event is staged annually by the Perth branch of the Australian EV Association and is drawing bigger crowds every year. Its success can be partly attributed to the ability for any licensed driver to test drive an EV around the RAC track. A range of vehicles will be on display including Tesla, Nissan, BWM, Porsche, Holden, Mitsubishi together with some very alluring do it yourself vehicles. Electric bikes and scooters will be there for those who favour two wheeled transport. Sustainable technology displays will also feature at the event.

This is a great day out for the family. Entry is a miserly $5 but if you want to test drive vehicles pay another $5 at the door and bring your drivers license. There are plenty of very knowledgeable EV enthusiasts in attendance and of course we’ll be there also. MEC is a member of the AEVA and we can vouch for this terrific event. As the show falls on the same day as the WA State Election our advice is to vote early then forget about politics and have a bit of fun.  See you there! 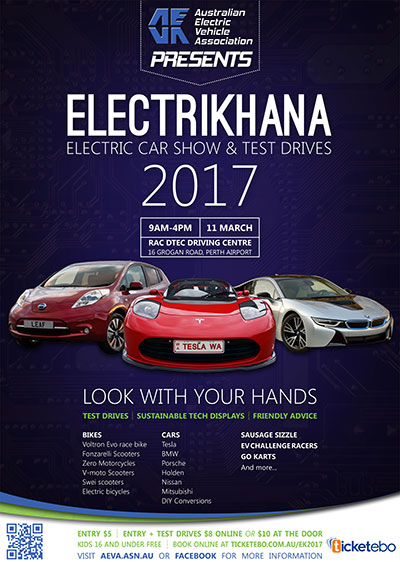