There’s been much speculation over recent weeks that Apple are ramping up to enter the car market.  The best guess scenario to date is that they will produce an electric vehicle around 2020 under the codename ‘Project Titan’, possibly shaped like a mini-van, that will compete with Tesla & GM and that it will be autonomous.  We’ve blogged about autonomous vehicles before (here and here) and it would seem they are literally just a few years away with many of the systems already implemented in current high end vehicles.

Does it make sense for Apple to enter the car market?  What is the game plan?  Certainly they have the war chest to do so being the most successful company on the planet but the vehicle market is notorious for slim profits even in good times and in bad times the picture normally turns grim.  Apple products as we are all painfully aware are not exactly on the cheaper end of smart devices with very healthy (some would say rip-off) profits.

Vehicles however in the not too distant future will be hi tech devices that happen to have four wheels.  That’s already the case with the Tesla Model S where updates to the vehicle provide additional capability and do bug fixes – just like computers and smart devices do.  Schedule your update and let the software take over to provide the latest version.  That is exactly how it works.  From a future tech perspective consider the Apple car as an i-device that happens to have wheels.

When  you look at it that way it makes more sense.  An Apple icar comes to pick you up having been summoned from whatever smart iapp you installed and you tell it where to take you.  During the journey with all that time on your hands and no need to even watch the road, what will you be doing – getting iconnected of course.  So is the end game a way to ensure Apple doesn’t hand that space to the likes of Google (who already have an autonomous electric vehicle)?

No one is quite sure what the plan is at this stage but we do know that Apple has been on an aggressive poach of battery maker A123 Systems employees.  A123 Systems are so peeved about the way Apple has gone about things that they have brought a lawsuit against the company that is quite revealing.  Not only have Apple been after A123 employees they have also been targeting battery personnel from the likes of  LG Chem Ltd., Samsung Electronics Co., Panasonic Corp., Toshiba Corp. and Johnson Controls Inc.

It also seems that Apple has been hiring experts in robotics (think production line assembly) and Elon Musk stated recently that they have been trying to lure employees from Tesla (unsuccessfully it would seem despite the enormous cash incentives).

The thing about vehicle manufacture however is that it is not easy.  The complexity of a new car company from scratch means it takes about 10 years to get a car to market.  Apple it seems wants to do that in just 5 years.  That would mean they would have to partner with an existing car manufacturer – possibly one in China.

It could also mean however that they simple buy the most advanced electric car manufacturer in the market and make a play for Tesla over the next 2 years.  Tesla is currently valued at $25 billion.  That’s loose change in the Apple war chest.  They would of course come in with a bigger offer and a figure of $75 billion to buy out Tesla has been heard on the streets. 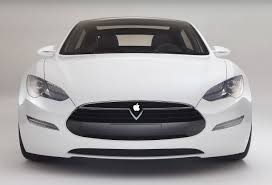 Having built the most futuristic and fantastic production car on the planet, would Elon Musk hand his baby over to Apple?  Anything could happen when the Gigafactory comes in to production and already 30% of that production is earmarked for home battery storage.  With the alignment of Elon’s cousin Lyndon Rive at Solar City (where Elon is chair), will the serial entrepreneur move his sights more to the energy business and his mission to Mars?

With these disruptive technologies on the near horizon, (solar energy, home battery storage and autonomous electric vehicles), it must be said we do indeed live in interesting times.

Don’t forget to become one of our switched on subscribers – you get exclusive content and EV news – great articles, EV topics & information – we will never spam you or share your details… just click below
February 22nd, 2015|Tags: A123 Systems, Apple, Autonomous Car, Batteries, Driverless Car, iCar, Tesla|