Elon Musk casually announced Tesla’s official entry into home battery storage.  Since the announcement of the Gigafactory there has been a deal of speculation that Tesla would move to home storage systems as it makes perfect sense for the company to enter the energy market.

He stated the home battery packs could be in production in as little as six months.

Electric cars, solar panels and home storage are a killer combination and the shock waves will be resounding with utility companies globally as their centralised energy model is undermined by these disruptive technologies.

It is no coincidence that serial entrepreneur Musk is chair of SolarCity – a company run by his cousin Lyndon Rive.

SolarCity installs and leases solar panels on their customers roofs for less than they pay for energy – it sells excess power back to the local utility.  This formula has been hugely successful for the company.  The logical step of course and the missing piece of the puzzle is energy storage and this is where the Gigafactory comes in to play.  It will initially reserve 30% of output for home storage systems while the remainder is earmarked for Tesla vehicles.

At an event in New York last year SolarCity announced plans for a huge solar panel factory with the intention of making solar the cheapest form of electricity in the United States. SolarCity already installs panels and batteries on commercial outlets such as Walmart saving them 20% – 30% on their energy bills.

The speed and uptake of these technologies can be likened to the advent of mobile phone technology over landlines with the important difference being the end user will not be held hostage by their current utility provider. 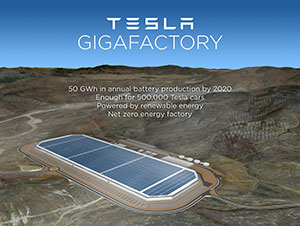 There is a distinct possibility that customers will simply disconnect from the grid. That is, unless their provider is nimble enough to come up with a new business model that addresses the tsunami of change about to wash over them.

The old model, like the old tech of the internal combustion engine, will no longer be relevant.  Can’t wait for the shift to decentralised clean power systems – bring on that juice please ….

Don’t forget to become one of our switched on subscribers – you get exclusive content and EV news – great articles, EV topics & information – we will never spam you or share your details… just click below
February 15th, 2015|Tags: Batteries, Elon Musk, Solar, Tesla|