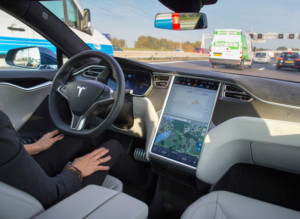 On May 7th the first US fatality was recorded with a Tesla Model S with autopilot engaged.  The accident occurred when a truck made a left turn in front of the vehicle.  The Model S struck the bottom of the tray which sheared off the roof with the car continuing some distance beyond the accident spot.

There has been much speculation in the press about this crash with the truck driver Frank Baressi claiming the driver, ex Navy Seal Joshua D. Brown, was watching a Harry Potter movie when the accident occurred.  There is no confirmation of such reports and it will be some time before we know for certain what actually happened.  Mr Brown had posted previous videos of his Model S with one showing how the autopilot system avoided an accident when a pickup truck veered into the lane the Tesla was travelling in.

To get some perspective on the statistics of vehicle accidents in the US, Tesla has stated: “We learned yesterday evening that NHTSA is opening a preliminary evaluation into the performance of Autopilot during a recent fatal crash that occurred in a Model S. This is the first known fatality in just over 130 million miles where Autopilot was activated. Among all vehicles in the US, there is a fatality every 94 million miles. Worldwide, there is a fatality approximately every 60 million miles. It is important to emphasize that the NHTSA action is simply a preliminary evaluation to determine whether the system worked according to expectations.”

Together with it’s significant ‘fan’ base Tesla is constantly under scrutiny from it’s detractors.  Tesla and Elon Musk have been criticised in their handling of this particular incident and the fact that before the accident was announced Tesla had raised $2 billion in a stock offering.  This capital raising had been previously flagged by Tesla on a first quarter earnings call.  Bill George, a Goldman Sachs board member tweeted: “How can Elon Musk possibly justify NOT disclosing deaths from self-driving Tesla autos prior to $2 B stock offering. It is clearly material.”  Goldman Sachs was one of the banks working on the stock sale.

George’s description of the Tesla being ‘self-driving’ reveals his own lack of understanding of the technology but George has a point about full disclosure and transparency.  Tesla’s handling of this incident could be seen as clumsy but from a cold business perspective the autopilot death had no effect on Tesla’s share price – in fact it went up on the day the news broke.

The issue in this accident is the questioning of autopilot technology and safety.  From a statistical viewpoint autopilot is without doubt a safer system than human driving but it is not perfect.  Autopilot requires the driver to keep his hand on the steering wheel and will give audio and visual alerts if it senses the driver is not touching the steering wheel.  If the driver does not take action on these alerts the car will slow itself down (read more on autopilot features here).  Just for the record this type of technology (adaptive cruise control) has been around since the 1990’s.

More accidents with semi-autonomous (or fully autonomous) vehicles will no doubt occur.  It would be naive to think otherwise.  However this technology offers a much higher degree of safety than our own woeful abilities at the wheel. On average in the US just under 90 people die every day in vehicle accidents (2014 figures).  It is estimated that more than 90% of accidents are caused by human error.  Globally over 1.25 million traffic deaths occur annually (2013 figures).

Autonomous driving has the potential to reduce this carnage significantly and will continue to improve and develop as it’s deployed in real world situations.