The Queensland government has called for expressions of interest in building an EV solar powered fast charge highway throughout the state.  Initially this would incorporate an existing petrol service station with fast charge facilties for EVs that would employ solar panels as the energy source.  It would eventually result in a series of solar powered EV fast charge stations along the Bruce Highway.

A service station located in Oonoonba, a suburb of Townsville, would be the pilot fast charge station to kick things off.  The local charge station start up Tritium announced earlier in the year plans to provide a fast charge highway (as reported by MEC in June – click to read). 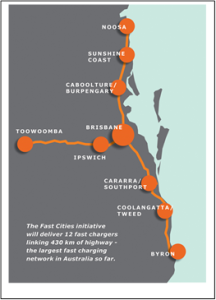 It is not clear at this stage how or if this initiative will link in with the Tritium EV fast charge highway.

Tritium have already secured contracts in the US with California based Chargpoint to provide fast charging facilities on both the east and west coasts.  They are also building an EV fast charge highway in New Zealand in conjunction with Charge.net.nz.  The plan is for around 75 fast charge stations throughout New Zealand to be in place by 2017.

The Queensland government spokes person, Coralee O’Rourke, stated: “Our vision is for this to be the start of an ‘electric super highway’ by facilitating fast-charging service locations for drivers travelling up and down the length of Queensland.”

Despite a lack of federal government interest in EV technology, the momentum towards EVs and infrastructure is clearly beginning to move forward with this recent announcement and the opening of the first electric highway in Western Australia just last month (see our blog post, Australia’s First Electric Highway).

Tesla have announced their own plans for a fast charge network along the east coast for the exclusive use of Tesla owners (free to charge for life).

At MEC we have bemoaned for some years the lack of interest in EVs in Australia with no incentives and a lack of vision in contrast to just about every developed country.

It’s encouraging to see that despite the lack of enthusiasm from our current federal government, the first steps are being taken to bring Australia in line with the rest of the developed world.