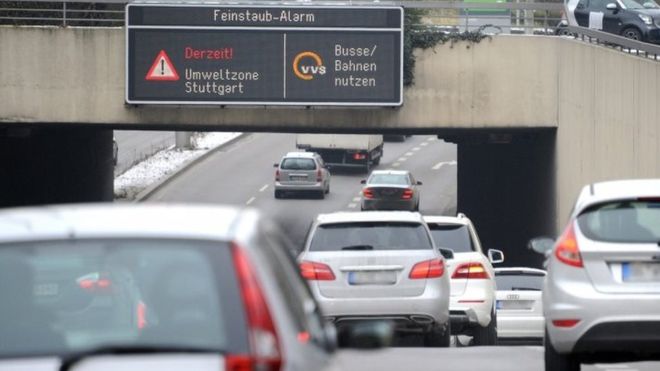 The town of Stuttgart in south western Germany has recorded levels of air pollution almost twice the safe maximum and residents have been told to leave the car at home. Levels of PM10 (particulate matter 10 micrometers or less in size) reached 89 micrograms on Monday which is almost double the upper limit ‘safe’ level of 50.

This is the type of news we hear from cities in China and India but the air quality of some European cities such as London, Paris, Barcelona, Madrid, Milan, Naples is basically not fit for breathing. Now add Stuttgart, one of the base manufacturing cities for Porsche, Daimler and Mercedes. The city’s mayor has urged people to leave the car at home and use public transport in an effort to protect citizen’s health.

Of course 89 micrograms would be considered an air quality achievement in places such as Delhi where the air quality index regularly rises above 300 micrograms (the EU recommended level is 25 micrograms).

There were over half a million premature deaths in Europe recorded in 2012 with over 90% of European citizens regularly subjected to fine particulate matter pollution levels above the World Health Organisations air quality guidelines. The cost is astronomic with estimates of 10% of GDP in Europe in 2013 – that’s $1.6 trillion!

Australia, as we’ve regularly pointed out in MEC, suffers the same problems from our reliance on oil as a transport fuel – almost $6 billion dollars cost in 2010 which was a doubling from $2.9 billion just 5 years previously. At that rate of increase our cost in 2015 would be at least $9 billion dollars. The human cost in 2010 was 1483 premature deaths – that’s greater than deaths due to road accidents (1367 in 2010).

The human cost is an obscenity and far surpasses all the wars, terrorism and other ‘newsworthy’ items we’re dished up by the media on a daily basis. The tragedy is of course we have the means to not only tackle this situation but completely reverse it with renewable energy and electrified vehicle fleets.  Efforts are being made as the situation deteriorates further with Delhi the latest city to introduce restrictions on traffic determined by number plate.

Most industrialised nations have incentives for the purchase of ultra low emission vehicles – Australian governments of course offer bugger all.  It’s a national disgrace that one of the richest nations in the world has no plan to save billions on health and premature death costs, reduce it’s reliance on foreign oil, improve it’s balance of trade and reduce poisonous and CO2 emissions.