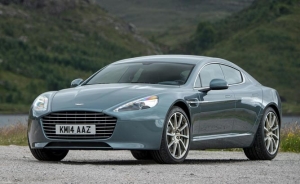 At the recent Bloomberg New Energy Finance Conference Andy Palmer (CEO Aston Martin) stated, “We’re a V-12 engine company. Project that into the future. Do I go the way of the rest of the industry and downsize the engine? Do I see Aston Martin with a three cylinder engine? God forbid! You’ve got to do something radical. Electric power gives you that power. It gives you that torque.”

He forecast an electric Rapide for end 2017.

The very first video on the MEC homepage is from Autocar UK showing a 2013 Tesla Model S taking on the Aston Martin Rapide.  It really highlights the difference between new tech and old (internal combustion engine) tech.

James Bond would be not be impressed with his traditional workhorse.

The Tesla Model S, despite looking the same, has evolved further since then with more power, dual motors, more torque, faster sprint times, faster top speed and is now getting ‘auto-pilot’ rolled out in one of it’s ‘over the air’ updates.

“We’re talking about an electric Aston Martin with between 800 and 1,000 horsepower – imagine having all that torque on demand,” Palmer said in an interview in London.  To maintain the exotic aura that’s surrounded the brand for power, looks and sexiness, Aston Martin acknowledges it needs to go electric.  Palmer also announced an electric DBX crossover to follow the electric Rapide.

“I don’t think James really cares what the power train is as long it’s fast and beautiful”  he stated.

Interestingly he also predicts the End of Diesel (one of our recent blogs) following the revelations surrounding the VW scam and thinks it is now in for a slow lingering death. He also brushed aside ideas of hydrogen fuel cells taking off – “we have to overcome the range anxiety. But that’s much better than the range panic that you’re going to get from having only four hydrogen stations in the U.K. – there are plugs everywhere.”