Costing an estimated $100 – $300 billion per annum with a death toll of 500,000 per year, Chinese Premier Li Keqiang says he is “declaring war” on pollution.  The costs of premature deaths and health problems was estimated in a joint report undertaken by the World Bank and the Development Research Centre of the State Council.  It was 14 months in the making.  The highly polluted air in Chinese cities could lead to severe longer term consequences identified in the report “because small children and infants are severely affected by air pollution, which leads not only to higher rates of infant mortality, but also birth defects and impaired cognitive functions.” 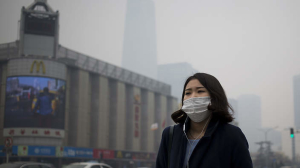 The smog in Chinese cities is now infamous with face masks becoming a permanent apparel item for Chinese citizens. “We will declare war against pollution and fight it with the same determination we battled poverty,” said the premier with the intention of closing 50,000 small coal-fired furnaces this year and cleaning up coal fired power plants.  He also flagged removing six million high polluting vehicles from the roads, the so-called “yellow cars”.  These high emissions vehicles which account for just 13.4% of the vehicle fleet are responsible for 81.9% of particulate matter, 58.2% of nitrous oxides, 56.8 % of hydrocarbons and 52.5% of carbon monoxides.

Although the air quality in Chinese cities is particularly toxic that is not to say air quality in other parts of the world is that much better.  Paris experienced ‘Chinese air quality’ recently as reported in MEC and other world cities are not immune from this deepening air quality crisis.  The World Health Organisation’s recently revised estimates puts an annual toll of 7 million premature deaths, more than double previous estimates, and now rates air pollution as the world’s largest environmental health risk.

In most industrialized cities vehicle exhaust is the major contributor to poor air quality.  With the human and economic costs of air pollution so staggering it would seem incentives to change the global fleet to emissions free transport would not be a cost impost to taxpayers but rather a cost benefit.