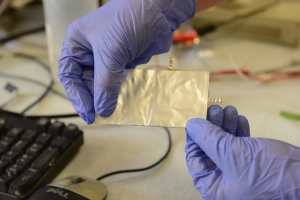 We’ve reported quite a bit about batteries over the years with a lot of hopeful technologies promising greater energy density, lower costs and improved performance.

Battery research has been frantic in the last few years with many organisations from IBM to leading universities to various startups vying for the holy grail of cheap, environmentally and operationally safe, energy dense with the ability for thousands of charge cycles and fast recharge rates.

The prize will be enormous for a battery that ticks all the boxes as there are now three major markets for cheap, safe and efficient batteries – consumer electronics, electric vehicles and grid/home storage.  Lithium ion has been the most widely adopted to date and prices have been falling quite rapidly over the years together with an increase in energy density.

Just over the past couple of days researchers at Stanford have announced an aluminium-ion battery that certainly has the qualities that everyone seeks although it’s still early days in it’s development with more research to be carried out.  This one looks to have enormous potential.

The researchers at Stanford University headed up by professor of chemistry Hongjie Dai efforts have resulted in a flexible high performance battery that’s environmentally safe, is very fast charging, long lasting, will not catch fire and is inexpensive.  Most boxes ticked!  Their research efforts have been announced in the journal Nature.

Although researches have been trying to produce an aluminium-ion battery for some years they have been unsuccessful.  Aluminium-ion is known to have attractive qualities such as low cost, low flammability and high-charge storage capacity.

Professor Dai remarks that the use of graphite for the cathode was an accidental discovery as so many things in science are, “we accidentally discovered that a simple solution is to use graphite, which is basically carbon. In our study, we identified a few types of graphite material that give us very good performance.”

The experimental battery shown in the video above has an aluminium anode with a graphite cathode and an ionic liquid electrolyte.  The battery is housed in a flexible polymer coated jacket.

The researches claimed exception charge rates that would literally mean a phone for example could be charged within a minute or two rather than the hours that the current lithium ion technology requires.