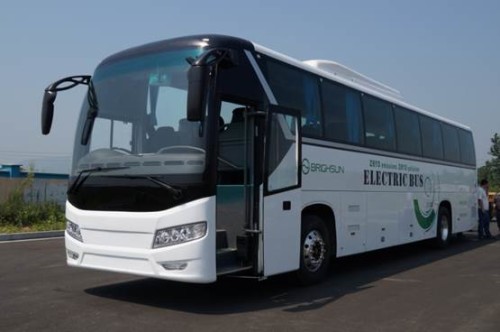 You may already have heard of the Brighsun Bus with a range over 1000kms on a single charge.

The launch of this extraordinary vehicle took place in Yuroke which is an hour’s drive north of Melbourne CBD last Friday 30th October.

The launch was attended by Greg Hunt, Minister for the Environment who confirmed the bus is certified to international standards. Four Brighsun buses were on display.

A launch trip from Melbourne to Sydney was planned for the next day but we don’t have confirmation on that at this time.

The bus runs on lithium ion batteries with Brighsun’s own proprietary battery management system that has been in development for the last 4 years.  This incredible range (by today’s standards) on a single charge is more than twice that of similar electric buses currently operating throughout the world.

It means the gruelling drive from Melbourne to Sydney (that I can personally attest to having done it multiple times), can be accomplished on a single charge.

It’s claimed the battery pack has a life of over 20 years – again an extraordinary achievement for today’s lithium ion technology which normally has an expected battery life of around 8 years for an EV.  Just to clarify that point, it does not mean the battery is dead after 8 years, it means the charge level has dropped to between 70% and 80% which is no longer deemed suitable for an EV but quite suitable for battery storage applications after the packs initial career.

Key industry players attended the launch from Vline, Fleet Partners and Skybus as well as delegates from the US, the Middle East and Asia.  CEO Allen Saylav stated, “New energy is key to Australia’s auto industry revitalisation and we believe the eBus is the first step in the right direction for this to happen. We chose the heavy commercial passenger vehicle to showcase how high performance could be achieved in larger transportation options, as well as in passenger cars”.

See the launch video below from Brighsun

Don’t forget to become one of our switched on subscribers – you get exclusive content and EV news – great articles, EV topics & information – we will never spam you or share your details… just click below
November 4th, 2015|Tags: Batteries, Brighsun, Electric Buses, Sydney to Melbourne|