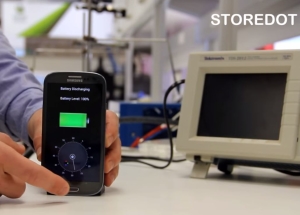 Not surprisingly with the amount of money in battery R&D, technological breakthroughs are happening on a regular basis.  Many of these ‘breakthroughs’ will for whatever reasons not make it to market.  We have reported on a number of battery technologies that look very promising and one that seems to be improving rapidly simply blows away the ‘hours to charge’ criticism of EVs.

That criticism has been addressed by fast charge stations that can give an 80% charge in about 20 minutes.  It could be however, in a few years that 20 minutes would reduce to 5 minutes.

An Israeli company has developed a battery technology from organic compounds that will charge a smart phone 100 times faster (under 1 minute for a full charge) and give a 300mile (483kms) charge in 5 minutes for EVs.  The technology is based on chemically-synthesized organic molecules and as such are non-toxic and environmentally safe.  Apparently these organic compounds are readily available and cheap to manufacture.

These are grand claims as such a technology, if successfully brought to market, will be a giant stride forward in consumer electronics and electric vehicles.  If I could purchase a battery that charged my phone in one or two minutes at a reasonable price I’d buy one tomorrow.  I wouldn’t even wait for the life of the current battery to run out – the convenience factor would be compelling.

The company with the unlikely name of StoreDot, hopes it will have an industry size and capacity battery in the hands of consumers in 2017.  StoreDot demonstrated a lab based prototype in a youtube video in April 2014 showing a Samsung Galaxy S4 charge from 27% to 100% in about 27 seconds!  However the charger looked quite bulky and the battery was just 900mAh.

A vastly improved prototype was demonstrated at CES 2015.  The battery will require modifications by the manufacturers but CEO, Doron Myersdorf, didn’t see that as an issue: “We’re talking with all the big guys” he stated.  Electric vehicles would be the next big opportunity and Myersdorf hopes to have a prototype available in ‘about a year’.

It’s rumoured Samsung have already invested in the company.